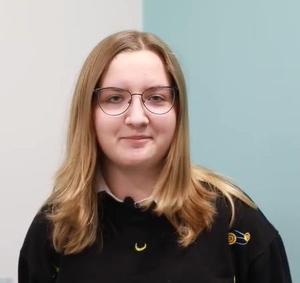 Winners Recognized at the VSBA Conference on Education
Three students received recognition for their submissions to the Virginia School Boards Association (VSBA) First Annual Student Essay Contest. Maggie Mandara, a rising junior at Smithfield High School, was the first place winner. The first through third place students were recognized at the VSBA Conference on Education, which took place virtually on July 20. This was the first year the contest was held and the theme of the contest was “Can and Should Freedom of Expression and Civility Co-exist?”. The sponsor of the awards was VACORP.
Winners were selected by a panel of judges who were presented the written essay as well as a recorded speech. To view Maggie’s winning speech please visit: https://vimeo.com/561441132. A copy of her speech appears below.
“Congratulations to Maggie for being the first student in Virginia to receive this distinguished honor for an amazing essay,” said Denise Tynes, Vice Chair of the Isle of Wight County School Board. “I encourage everyone who cares about why we have freedom of speech to read the essay and to truly think about the purpose and meaning of Maggie’s remarks.”
Mandara attended the Virtual Conference live and delivered her speech to the audience of Virginia school board members and superintendents. “This contest provides a wonderful opportunity for school board members from across the state to hear student voices on subjects of importance to them,” said executive director Gina Patterson.
Maggie's Speech: Freedom of Expression & Civility:
Democrat, Republican. Conservative, Liberal. Christian, Atheist. What is the first thing people think of when they hear these pairings in the same space? The thing that often comes to mind are two things: violence or resentment. In all honesty, who is to blame for these being the first things that are thought of when we think of opposing beliefs? It’s not as though history has proved these thoughts wrong, or as if our present day political environment has done so either. Freedom of expression and civility should co-exist, though it isn’t likely they ever will. Allow me to explain why.
To start this much needed conversation, we must start with the most prevalent part: the two-party system. Why is it that a country that was founded to evade a place with one prominent belief, has ended up as a place that has but two? Though many beg to differ, nobody in this country can deny the stakes of an election, how vicious our country becomes whenever it comes time every four years. Such violence, such resentment, that it leads to the limiting of thoughts, the limiting of personal beliefs out of fear for themselves. This system of only having two prominent parties is flawed in countless ways; the largest one being the limiting of opinion.
“Limiting of opinion?”, one might ask in a hysterical tone, showing the lack of belief because “This country is a democracy! However could you believe that people are limited here?” There. Right there. That is one of the reasons this country has been stumbling to find ground beneath its feet, in a constant struggle to reach stability. When someone thinks about our country, they think it’s the land of the free, correct? Wrong. In the same light, nobody can deny the fact that this country is in fact a democratic nation, one built off the opinion of the people. That in other places in this world, it’s a much worse struggle for the people’s opinion to be heard. So one might think- “Why aren’t we grateful for what we’re given, isn’t it enough?” It’s that exact train of thought, the one implying that once you’ve received something good you stop pushing for more, that makes people fearful to do just that: to push for a change.
Why must someone be the Jester in a King’s court to try and point these things out? Why are some people given the option to oblivion? The line that exists faintly in some lives, where that very same line is prominently displayed, enough to trip over, in others; is absurd. Diversity is a prominent thing in this country, many like to say. As they’re saying it, they don’t seem to realize the weight of their words. The weight being: something you may consider a “political opinion”, is a personal right to someone else. The lack of awareness, the ignorance regarding that very statement in this country is one of the founding principles on why this country always seems to be in a state of discourse.
Separation of church & state, along with religion, causes a large uprising in this country, one that can and will not be ignored. Freedom of expression suddenly becomes conditional to those under the “review” of a religious person, even if they don’t share the same beliefs.
Marriage and adoption equality is another thing that causes an uprising in this country, one of the largest “issues” to those who believe their religion reigns supreme. The debate over whether or not two men or two women are capable of raising a child is entirely foolish; as in reality, a child does not need a mother, a child does not need a father. A child needs a parent.
How long? How long is America going to falter, always pressing against itself in an effort to gain an ounce of stability? How far? How far is this country going to allow people to spew hatred towards others and disguise it under a veil of personal beliefs before a line is drawn? How much longer? How much longer is our youth going to be scrutinized before those in charge take the time to try and think about why it is that young people must be so outspoken? Too far and too long, are the answers to these questions.
This conversation could last for ages, but if nobody listens, if nobody chooses to feel empathy for others outside of themselves, freedom of expression and civility will never co-exist in this country.
Published July 22, 2021