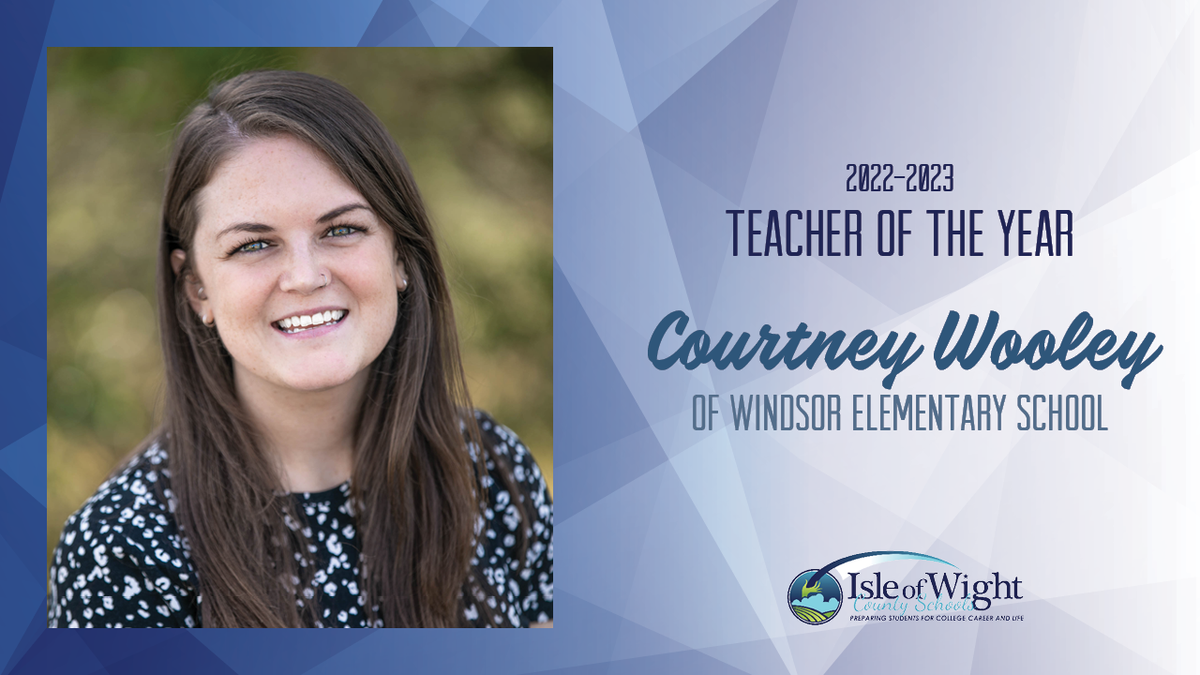 Courtney Wooley is in her second year as a Special Education teacher at Windsor Elementary School. Before coming to IWCS, she spent one year as an English as a Second Language (ESL) tutor and six years as a Special Education teacher in a neighboring district. Mrs. Wooley was born and raised in Isle of Wight County and is a 2009 graduate of Smithfield High School. She earned her undergraduate degree in Interdisciplinary Liberal Studies and Exceptional Education from James Madison University and her Master’s degree in Special Education from Old Dominion University. Mrs. Wooley teaches in a self-contained Special Education classroom for students who need support with academics, behavior skills, and communication skills. She is passionate about helping her students develop their unique gifts and giving them meaningful and intentional inclusive experiences with their peers.  Mrs. Wooley lives in Isle of Wight County with her husband and two sons. 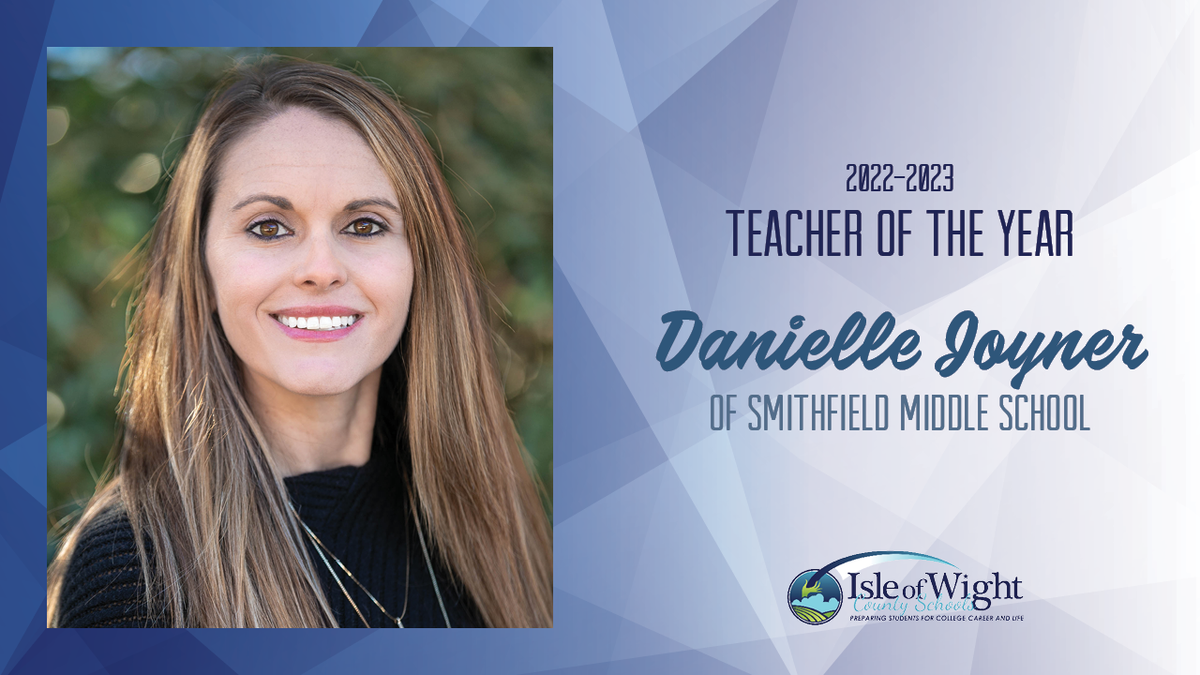 Danielle Joyner’s career has been 15 years of amazing opportunities that have culminated in her second year as the CTE/Technology Teacher at Smithfield Middle School. She first came to Isle of Wight in hopes of being closer to her children as she moved to Smithfield with her husband and 2 daughters the previous year. She began by teaching 5th grade science and math at Westside Elementary School before being asked to make the move to Smithfield Middle School.  She now supervises production of the school morning show, is the School Information Officer, runs all the school’s drone and robot opportunities, and is a mentor to new teachers. Her journey as an educator began in Newport News as a 5th grade science teacher, followed by time at the Discovery STEM Academy as the STEM Coordinator for 7 years. She received her bachelor’s degree from the University of Arizona and a Master’s Degree in Curriculum from Virginia Tech. Understanding that every student has unique strengths and needs as well as needing authentic connections to what they are learning has become the cornerstone of her instruction. However, the heart of what she does is to put the students first and develop those relationships. Mrs. Joyner is excited to grow the technology program so that students will have more opportunities to show their success, whether it is with robots, design or school-based careers. 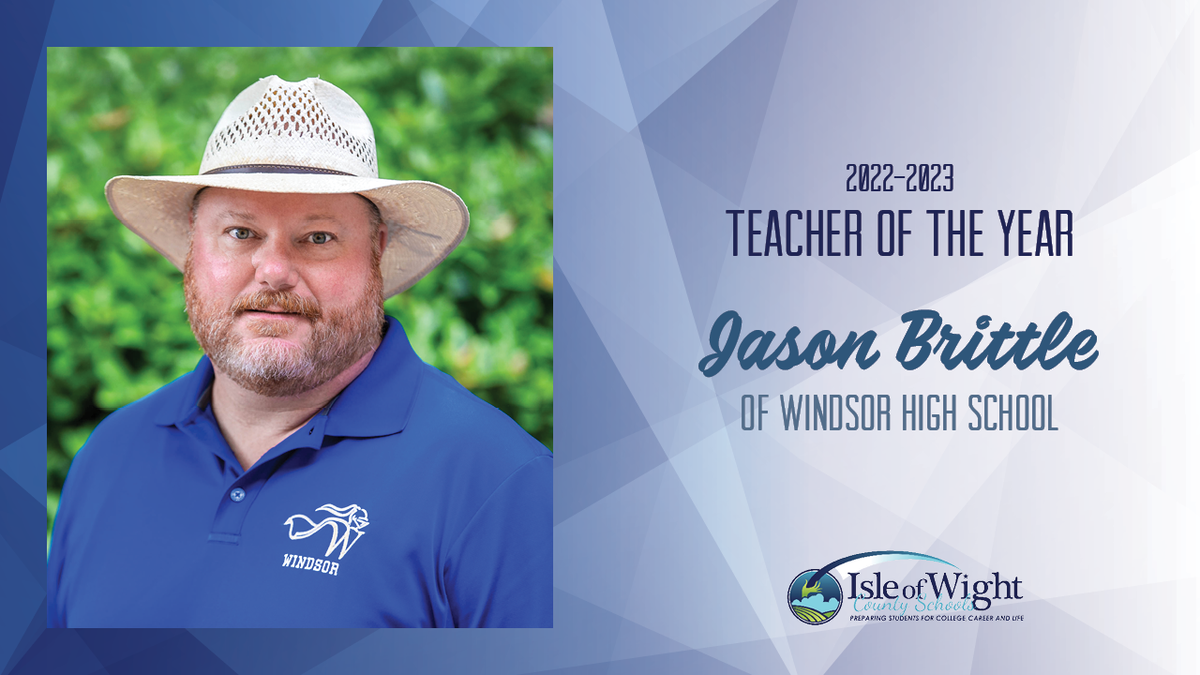 Jason C. Brittle is the Agriculture Teacher who has been instrumental in the creation and growth of the Isle of Wight County Schools (IWCS) Agricultural Land Lab. His twenty-three-year journey in education led him to the “Castle” where he joined the Windsor High School (WHS) Dukes family six years ago. Prior to Windsor High, he taught in a middle school, three high schools, and even a prison.  The highs and lows of the journey have taught Mr. Brittle that the most important part of education are the kids and the trusting relationships that they build with one another.  He currently serves his students as Future Farmers of America (FFA) advisor of the newly reinstated Walter S. Newman FFA chapter.  His desire to serve IWCS and WHS students and staff can also be seen through his active membership in the IWCS Career and Technical Education (CTE) Advisory Council, WHS Leadership Team, the CTE, Fine Arts, and Foreign Language Cohort, and Senior Class Sponsor.  Mr. Brittle grew up just across the Blackwater River in Franklin and attended college at Paul D. Camp Community College and Virginia Tech, where he earned his Bachelors of Science in Education.  He and his wife, also an educator in IWCS, live in nearby Courtland, with their two children, who are students in Isle of Wight County Schools. 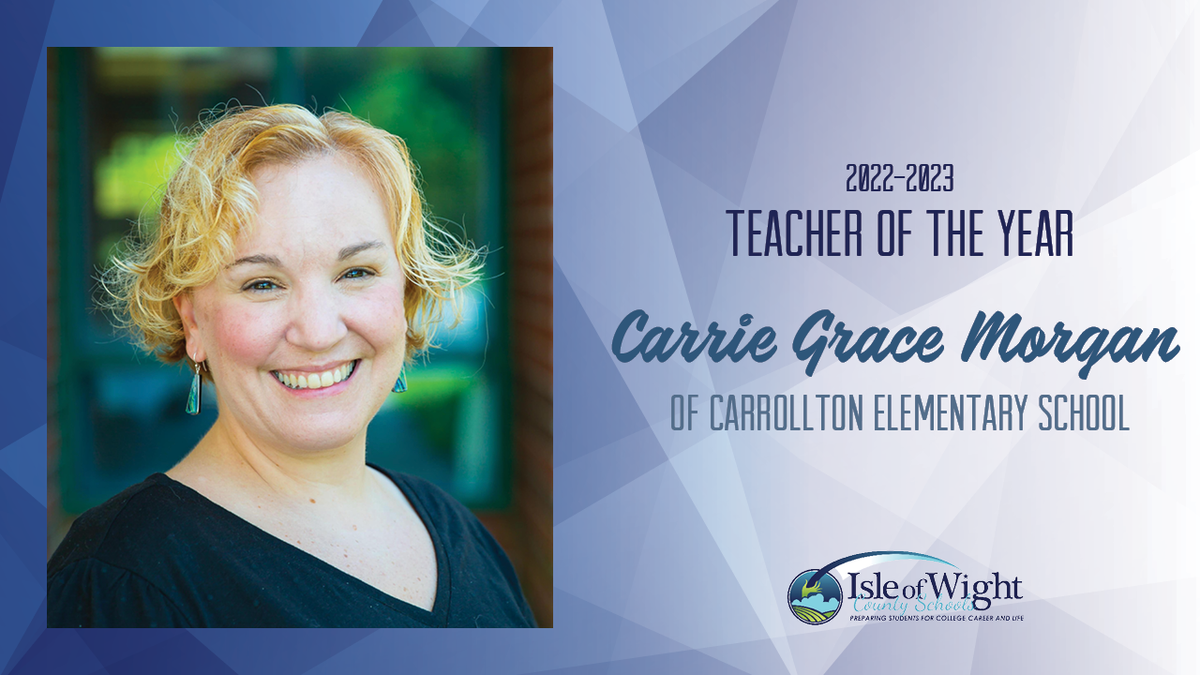 Carrie Grace Morgan is in her twenty third year of teaching at Carrollton Elementary School.   She has taught second, third, and fifth grade, but found her home for the past 15 years in first grade.  A graduate of Mary Baldwin College with a B.A. in theatre with distinction, Ms. Morgan received her master’s degree in early childhood education from Old Dominion University.  She lives in her childhood home with her 7-month-old peekapoo puppy, Hazel Mae. When Ms. Morgan is not in the classroom, she can be found at StudioSeventeen teaching musical theatre or on the stage performing with one of the many local community theatres in the Hampton Roads area.  Her favorite subject to teach is math because it is fascinating to watch students grow in their ability to speak about their mathematical thinking. 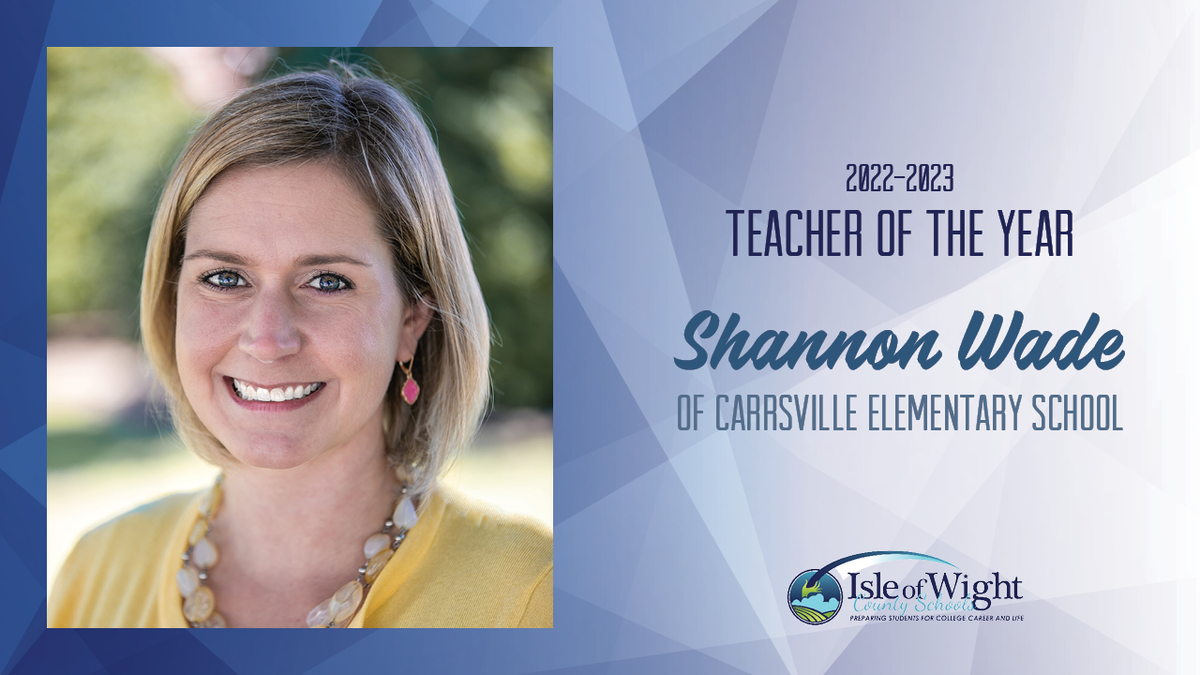 Shannon Wade is in her fourth year as a kindergarten teacher at Carrsville Elementary School.  A native of nearby Southampton, she attended Paul D. Camp Community College and Old Dominion University, where she earned her Master’s in Early Education. She previously taught kindergarten for seven years with Franklin city schools. Since then, Mrs. Wade has participated in many committees such as Isle of Wight County Fair Hay bale committee, Kindergarten Graduation Committee, Valentines Dance Committee and has been an active participant in the PTA.   Mrs. Wade’s desire to become a teacher stemmed from her own educational struggles as a young child in elementary school.  Her struggles with retaining and applying new information lead to feelings of inadequacy, frustration, and social anxiety.  Thankfully, she was blessed with an amazing teacher in first grade who took the time to help her see her potential and build her confidence.  The love shown to her by her first-grade teacher helped her realize she is valued, loved and can accomplish anything she works hard for.  She learned that all students learn differently and, even though it may take a little longer or require more effort, she was capable of learning and doing great things.  From her personal experience, Mrs. Wade is committed to creating a love for learning for every child. 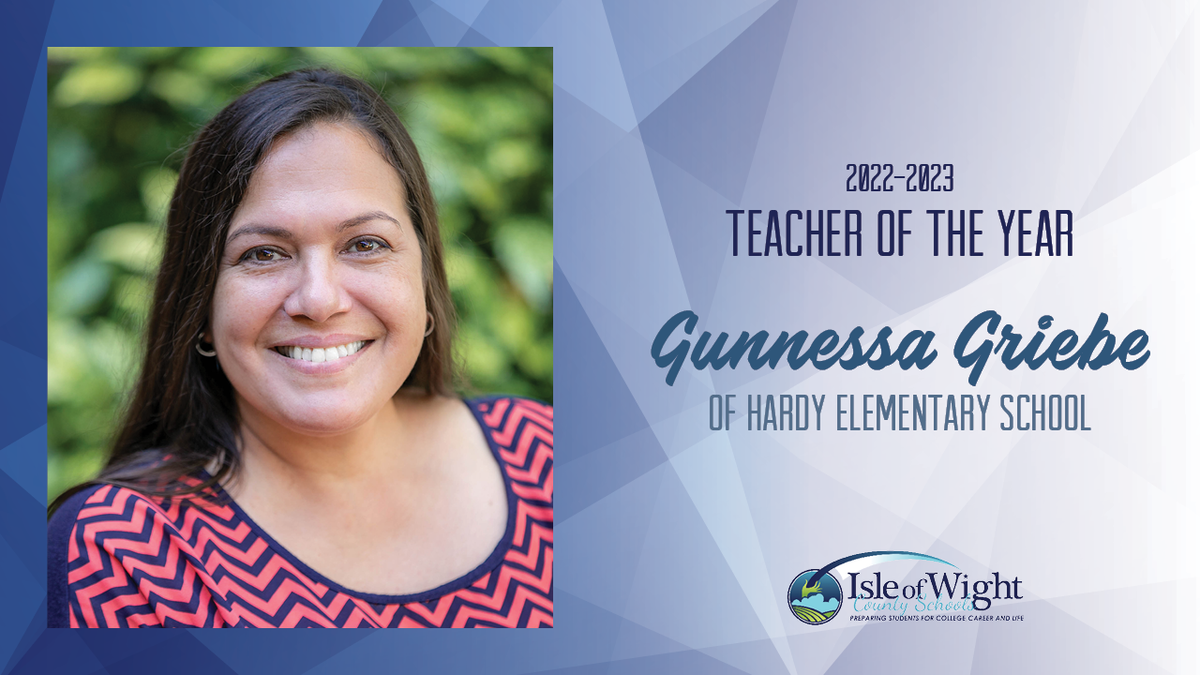 Gunnessa Griebe is in her fourth year with Isle of Wight County schools as a Special Education teacher at Hardy Elementary School.  Ms. Griebe made a career switch into education after 21 years in the United States Air Force. She spent 5 years as a paraprofessional before completing coursework at East Carolina University to obtain her teaching license. She then taught for four years as a special education teacher, working with students with moderate to severe disabilities prior to moving to Virginia. In addition to delivering specially designed instruction, Ms. Griebe continually seeks out innovative ways to best serve the individual needs of her students. She recently completed her master’s degree in Curriculum & Instruction with an emphasis in Special Education. Originally from West Seneca, New York, she currently resides in Carrollton and is a proud mother of three adult sons. 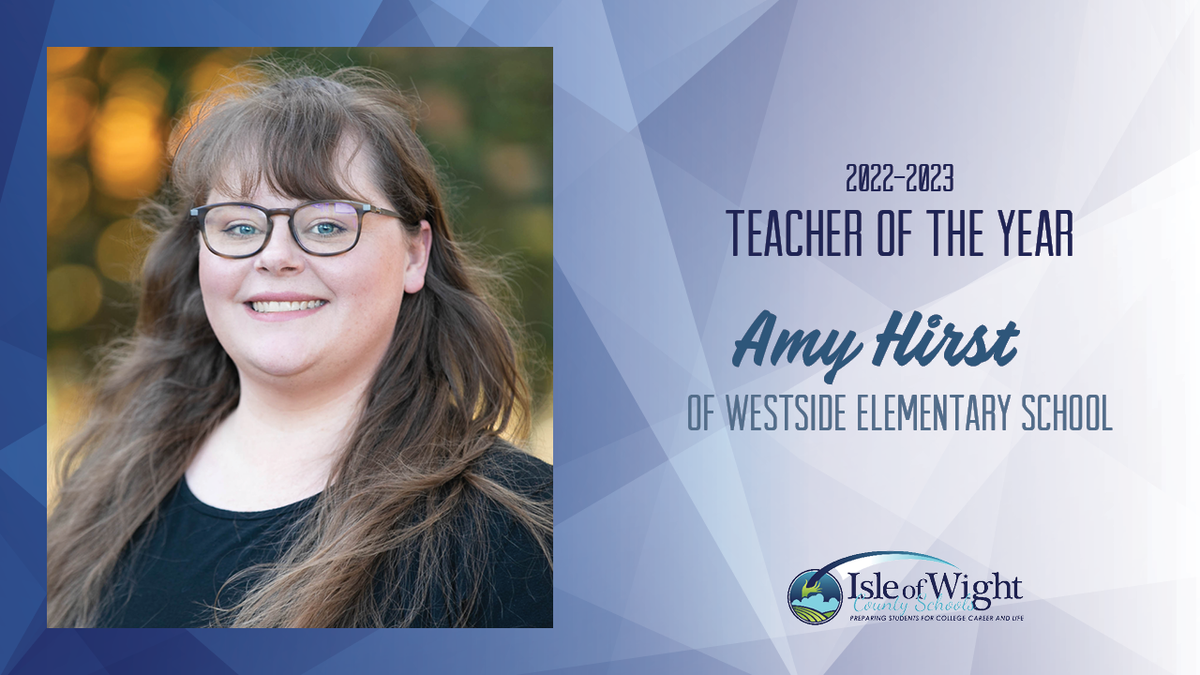 Amy Hirst is a fourth-grade language arts teacher at Westside Elementary.  As the daughter of local business owners, she chose to attend college close to her hometown of Suffolk, Virginia, earning her undergraduate degree in interdisciplinary studies and her Masters of Science in education from Old Dominion University.   Mrs. Hirst is currently in her tenth year of teaching, five of which have been at Westside.  Prior to making Isle of Wight Schools her home, she spent time as a K-1 bridge class teacher, and third grade math and science teacher in another district.  Though she tends to be reserved around adults, she comes alive in front of children, endeavoring to make her instruction interactive and engaging.  She is always on the lookout for new approaches to teaching her content, and actively collaborates with her colleagues to share new ideas and resources.  Mrs. Hirst is passionate about building positive and authentic relationships with her students, which led to her being voted “Most Loving Teacher” by the student body of her school.  In addition to being a classroom teacher, she is also a mentor to new teachers and the co-sponsor of the Westside Jr. Beta Club.  Mrs. Hirst is thrilled to teach in the town of Smithfield, where she lives along with her husband and dog. 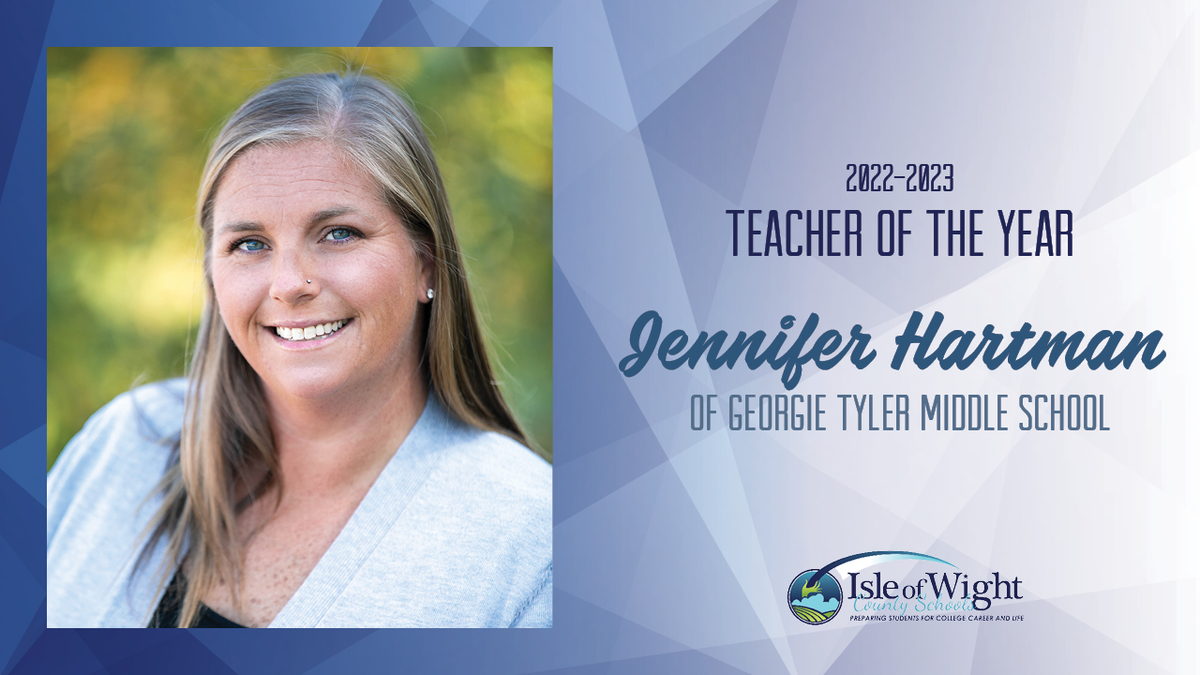 Jennifer Hartman is a devoted seventh grade English teacher at Georgie D. Tyler Middle School.  She is currently in her sixth year of teaching, all at GTMS with Isle of Wight County Schools.  In addition to teaching English, Mrs. Hartman currently is grade level chair for 7th grade. She graduated from Surry County High School in 2002 and attended Thomas Nelson Community College for two years.  She then went on to attend Old Dominion University where she earned a Bachelor’s Degree in English Literature.  She returned to Old Dominion University participating in the Post-Baccalaureate Endorsement Program where she received her teaching licensure for secondary English (grades 6-12). Mrs. Hartman is a teacher that puts relationships with her students first.  She spends countless hours making high-interest, engaging lessons, which enables every student to be successful at their own level of learning.  She currently lives in the Town of Windsor with her husband and three children, all of whom attend school in the division. 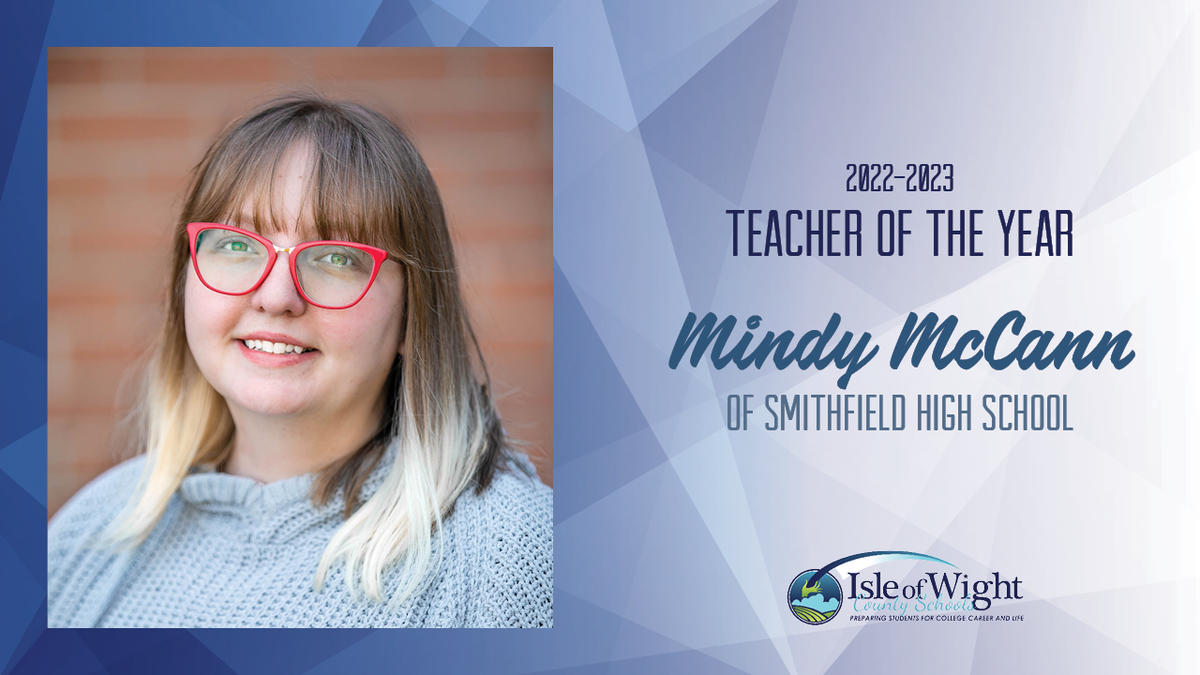 Mindy McCann is a passionate Algebra 1 teacher who was born and raised on the Middle Peninsula, traveling between Gloucester and Mathews. She didn’t venture too far for college, getting her bachelor’s degree in Sociology from Christopher Newport University. After college, she worked at Ferguson Enterprises. While working at Ferguson, she decided she wanted to become an educator in order to make a difference in the lives of students. She received her teaching license through Old Dominion University to teach math. She is now in her fifth year of teaching, all at Smithfield High School. She currently lives in Suffolk with her two purr babies. She believes in the importance of collaboration, critical thinking, and a welcoming environment to ensure the success of all students. In addition to teaching math, she is the assistant coach for the varsity field hockey team, sponsor for Interact Club and co-sponsor for the RPG Club.