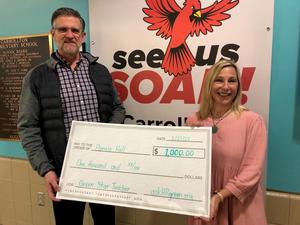 Pamela Hall receives Green Star Teacher Award from askHRgreen.org
Creativity in the classroom was worth more than a shiny gold star earlier this month when askHRgreen.org leaders recognized ten local educators with its Green Star Teachers Awards. Held in concert with the organization’s ten-year anniversary, the educator recognition program included a $1,000 monetary award for each of the teachers to use for future green- themed classroom projects.
One of the honorees is Pamela Hall, STEM teacher at Carrollton Elementary School. Her nomination stated,” Everything Ms. Hall does with her students is hands-on, life-applicable, sustainable, and green. Her students have learned to repurpose everything from plastic bags to cereal boxes to egg cartons. Ms. Hall has also taught her students about renewable energy and plans to use her award funds to help students incorporate wind and solar energy into their engineering projects.”
News of the Green Star Teachers program was announced last fall, when nominations opened to any Hampton Roads instructor overseeing unique green-focused studies and projects with K-12 students. An askHRgreen.org steering committee pored over more than 40 nominations sent in from colleagues, parents and administrators, identifying educators who developed and led immersive, ecofriendly teaching experiences for their students.
The Green Star Teachers may use their awards to cover needs such as supplies, classroom resources or funding to underwrite a dynamic “green” student-driven initiative. “One common theme among the nominations we received was just how creative and resourceful the region’s educators are when it comes to bringing the outdoors into the classroom,” said Eastep. “The additional funding will go a long way towards supporting many creative endeavors over the next year.”
The Green Star Teachers program coincides with askHRgreen.org’s 10th anniversary year. Groundbreaking when the website launched in July of 2011, the initiative provided a central resource where residents could learn about recycling, smart water use and how to keep local waterways clean. “The pandemic has been such a difficult time for students and teachers,” said Rebekah Eastep, an askHRgreen.org team leader. “We wanted to use this special anniversary as a way to give back and recognize educators who have gone above and beyond to promote environmental stewardship in their schools and communities.”
To learn more about the Green Star Teachers recognition program, and to view information/photos of all the recipients and their winning projects, visit https://askhrgreen.org/greenstarteachers/
Pictured:  Carrollton Elementary Principal Bob Brennan and Pamela Hall
Published March 16, 2022