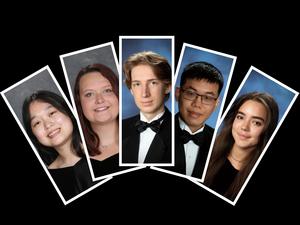 Smithfield High and Windsor High held commencement ceremonies on Friday, June 10, at Liberty Baptist Church in Hampton, VA.  Windsor High graduated 123 students, with 59 recognized as honor graduates.  The class earned $993,737 in scholarship money.  Eva Fong, whose parents are William and Yan Fong of Windsor, VA was the class Valedictorian.  Fong will attend the University of Virginia and study Computer Science.  The salutatorian was McKenzie Powers, daughter of Michael and Heather Powers of Windsor, VA.  Powers will also be attending the University of Virginia and majoring in Biomedical Engineering.


Smithfield High had 317 graduates in June, with 135 recognized as honor graduates.  The class earned $5,721,843 in scholarship money. The class valedictorians were Jason Cox and Vincent Ni.  Cox is the son of David Cox and Joan Brauckmann of Smithfield, VA.  He will be attending the University of Virginia and studying Computer Science in the School of Engineering.  Ni, whose parents are Ji You Ni and Dan Wei Wang of Smithield, VA,will attend the University of Michigan where he will major in Aerospace Engineering.  The class salutatorian was Faith Wells.  Wells is the daughter of Jeffrey and Andrea Wells of Carrollton, VA.  She will be attending the University of Virginia in the fall where she will pursue a double major in Biology and Interdisciplinary Studies.