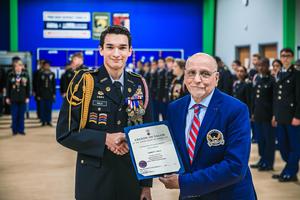 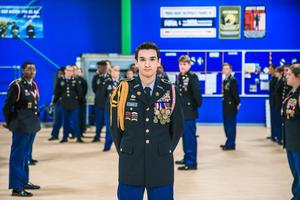 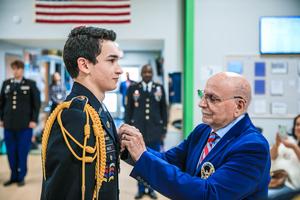 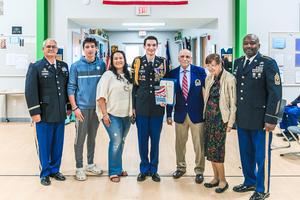 Garrett Halle Honored with Legion of Valor Award
Cadet Captain Garrett Halle, a senior at Smithfield High School (SHS), was recognized recently with the Legion of Valor Award for 2022. Cadet Halle serves as the Battalion Commander of the Smithfield JROTC Packer Battalion. The award was presented to Halle by LTC (ret) Rich Rinaldo, a Distinguished Service Cross recipient. Only 1 cadet in approximately 4,000 cadets participating in JROTC is honored with this prestigious award.
Halle is a member of the SHS National Honor Society and the SHS Rifle Team. He was a member of the Fort Leavenworth High School JROTC National Champion Raider Team twice, and has received numerous awards, including the Special Forces Award of excellence and the Superior Cadet Award. He also served on the JROTC Leadership, Academic, and Drill Teams.
During his junior year, Halle participated in various leadership opportunities, including the Senior Leader Experience at the United States Military Academy, West Point, NY., Virginia Boys State, and the JROTC Cadet Leadership Challenge (JCLC) at Virginia Tech.
Halle is ranked in the top 7% of his class with a cumulative grade point average of 4.33. He is active in both his community and his church. After graduation, Halle plans to attend Brigham Young University on an ROTC scholarship and serve in the US Army as an officer after earning his degree.
Published October 13, 2022