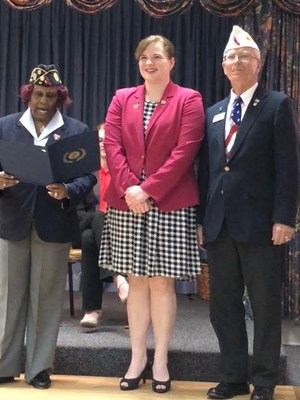 SHS Sophomore and JROTC Cadet 2LT Devin Fitzgerald competed against three seniors and another sophomore from the southeastern region of Virginia in the Annual American Legion Oratorical contest on February 3.  She placed first among the orators and will compete again on March 9th against the other two regional winners at the VA Beach convention center for the state title.  If victorious at the state competition, Devin will have earned the opportunity to compete for the national award, an $18K college scholarship.  Devin will also be competing earlier on March 9th, along with he rest of the SHS JROTC Drill Team, at the American Legion Armed Drill Competition State Meet as well.  With a chance to claim two state American Legion Titles in the same day Devin said, ”I am excited and up for the challenge.  I hope both our team and I can bring back state American Legion titles to SHS. It is what we have been practicing for all year.”