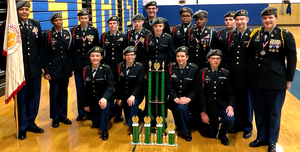 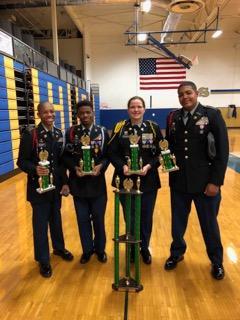 JROTC team will compete for state title in March

he Smithfield High School JROTC Drill Team took first place in the American Legion Eastern Regional Drill Competition conducted on Saturday, December 1, at Smithfield High School.  The Drill Team placed in all four events: first place in Armed Regulation Platoon, led by Justin Allen; first place in Armed Inspection Platoon, led by Devin Fitzgerald; first place in Armed Exhibition, led by Theron Blount; and third place in Color Guard, led by Derrick Jackson. When asked about the accomplishment of making it to the state competition for the second year in a row, Devin Fitzgerald, Assistant Drill Team Commander, said, “Over half of our team this year consists of freshman and they have worked very hard to perform at this level so quickly. It is a huge accomplishment for us to have made it to states this year.” The team, sponsored by American Legion Post 49, will represent the Eastern Region at the American Legion finals on March 1 at Little Creek Amphibious Base in Virginia Beach.